The programs, data and operating system code is stored on a disk which has an XFS (eXperimental File System) in it. (Refer XFS Specification)

The various functionalities of XOS include
top ↑

The operating system organizes memory as given below

Any program in its execution is called a process. Processes will be loaded into memory before they start their execution. Each process occupies at most 4 pages in of the memory. The processor generates logical addresses with respect to a process during execution, which is translated to the physical address. This translation is done by the machine using page tables, Refer Address Translation (XSM Specification)

A process in the memory has the following structure. The structure of a process is as shown: 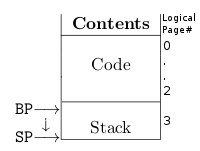 It contains data pertaining to the current state of the process. The size of the PCB is 32 words.
Structure of a PCB is given below

The process identifier is a number from 0 to 31, which identifies the processes in memory.

The process state corresponding to a process, indicated by STATE in the PCB stores the state of that process in the memory. A process can be in one of the following states.

Each process has its own set of values for the various registers. Words 7 – 14 in the PCB stores the values of the program registers associated with the process .

The Per-Process Open File Table contains details of files opened by the corresponding process. Every entry in this table occupies 2 words. A maximum of 8 files can be opened by a process at a time, i.e. up to 8 entries in the PCB. It is stored in the PCB from words 15 to 30. Its structure is given below
For an invalid entry, the value of pointer to system wide open file table is set to -1.

The list of PCBs stored in the memory is used as a Ready List by the operating system to schedule processes to CPU. The STATE in the PCB indicates whether a process is ready for execution or not. A new process in memory is scheduled for execution by circularly traversing through the list of PCBs stored in memory and selecting the first Ready process after the PCB of the currently running process in the list.

A maximum of 32 PCBs can be stored in the memory, and hence the maximum number of processes that can be run simultaneously is limited to 32. The PCB list is stored in pages 3 and 4 in the memory (words 1536 – 2559)

Every process in XOS has a Per-Process Page Table. A total of 32 PCBs and 32 Page Tables are available. This limits the number of processes that can be run to 32. The structure of a Per-process Page Table entry is shown below

An example of page table is given below

In the above example:
top ↑

To support multiprogramming in the system, the kernel makes use of the scheduler which is present in the Timer Interrupt Routine in pages 9 and 10 of the memory.

INIT and other user programs

The INIT process is the first user program that is loaded by the OS after start up. The INIT and other user processes uses the memory pages 25 to 63 for execution.
top ↑

XSM uses a paging mechanism for address translation (Refer Address Translation in XSM Specification ). XOS supports virtual memory, i.e. it supports execution of processes that are not completely in memory. It follows pure demand paging strategy for memory management. Pages are allocated as and when required during execution.

Paging is the memory management scheme that permits the physical address space of a process to be non-contiguous. Each process has its own page table (Refer The Per-Process Page Tables), which is used for paging.

The free list of the memory consists of 64 entries. Each entry is of size one word. Thus, the total size of the free list is thus 64 words. It is present in words 1280 to 1343 in memory. (words 256 to 319 of Page ) of the memory. Each entry of the free list contains a value of either 0 or 1 indicating whether the corresponding page in the memory is free or not respectively. When a page is shared by more than one process, the entry stores the number of processes that share the page.

XOS allows virtual memory management, i.e. running processes without having all the pages in memory. It makes use of a backing store or swap in the disk to replace pages from the memory and allocate the emptied memory to another process. This increases the total number of processes that can be run simultaneously on the OS.

When a process starts executing, no memory pages are allocated for it. Initially its per-process page tables are set with the block numbers of the disk blocks which contain the data blocks of the program. For each page table entry, the Auxiliary Information are intialized to 0 (invalid) and 0 (unreferenced). When a page is referenced for the first time, it triggers a page fault exception (since valid bit is set as 0). The Exception Handler Routine is responsible for loading the required page from the disk to the memory. This strategy of loading pages when accessed for the first time, is known as Pure Demand Paging.

On encountering a page fault exception, the Exception Handler Routine loads the required page from the disk to a free page in the memory. If no free page is available in the memory, a page replacement technique is used to select a victim page. The page replacement technique used in XOS is a second chance algorithm (Refer Silberschatz, Galvin, Gagne: Operating System Concepts) which uses the reference bits in the auxiliary information. The victim page is swapped out to to the disk (swap area) to accommodate the required page.

Apart from the file system data structures XOS maintains details about files opened by all processes in the System-wide Open File Table. XOS uses a scratchpad to access files in the memory which will be explained further in this chapter.

File allocation table (FAT) is a table that has an entry for each file present in the disk. FAT is stored in disk block 19 in the XFS disk. FAT is loaded into page number 5 of the memory when the OS starts.

The structure of FAT entry is given below

There is a specific page of the memory which is reserved to store temporary data. This page is known as the Scratchpad. The scratchpad is required since any block of the disk cannot be accessed directly by a process. It has to be present in the memory for access. Hence, any disk block that has to be read or written into is first brought into the scratchpad. It is then read or modified and written back into the disk.

File system calls are used by a process when it has to create, delete or manipulate Data files that reside on the disk (file system). There are seven file system calls. An interrupt is associated with each system call. All the necessary arguments for a system call are available in the user stack with the system call number as the last argument.

NOTE: Filenames must not exceed 10 characters


This system call is used to create a new file in the file system whose name is specified in the argument. The return value of the Create() system call is 0 if it is a success, and -1 otherwise. If the file already exists, the system call returns 0 (success). It invokes Interrupt 1 Routine.


This system call is used to open an existing file whose name is specified in the argument. It calls Interrupt 2 Routine. The return value of the Open() system call is an integer value called FileDescriptor, which is the index of the corresponding file’s entry in the Per-Process Open File Table.


This system call is used to close an open instance of a file. fileDescriptor is the integer value returned by the corresponding Open() system call. The return value of the Close() system call is 0 if it is a success, and -1 otherwise. It invokes Interrupt 2 Routine.


This system call is used to delete the file from the file system whose name is specified in the argument. The return value of the Delete() system call is 0 if it is a success, and -1 otherwise. It invokes Interrupt 1 Routine.


This system call is used to change the current value of the seek position in the per-process open file table entry of a file to the newLseek value. The return value of the Seek() system call is 0 if it is a success, and -1 otherwise. It invokes Interrupt 3 Routine.


This system call is used to load the program, whose name is specified in the argument, in the memory space of the current process and start its execution. The return value of the Exec() system call is -1 if it failed. It invokes Interrupt 6 Routine.


This system call is used to terminate the execution of the process which invoked it and removes it from the memory . It schedules the next ready process and starts executing it. When there is no other ready process to run, it halts the machine. It invokes Interrupt 7 Routine.

When the machine encounters an exception it sets EFR (Exception Flag Register) with details corresponding to the exception and calls the exception handler routine (pages 7 and 8 in memory). (Refer Exceptions in XSM)

The structure of EFR is given below

XOS handles all exceptions other than Page Fault by killing the process which caused the exception.

The Cause field of EFR for Page Fault Exceptions is 0. The logical page which caused the exception to occur (indicated by BadVAddr field in EFR ) will not have a corresponding valid entry in the page table of the process. If the page table entry contains a disk block number, the block is loaded from the disk to a free memory page, and this memory page number is stored in the page table entry (See Virtual Memory). The Valid/Invalid bit is set to 1, and the exception handler returns back to the process.